My head is spinning from the onslaught of troubling news this week, President Trump’s first full week in office: from his neediness to appear the greatest to his disregard for the truth, from his first attacks on the environment to his appalling executive order that is, in effect, a Muslim ban. Below I offer my take on the week’s top stories. I’ve tried to keep it brief – but do know there were a lot of other signals that our democracy, as we know it, is in danger. 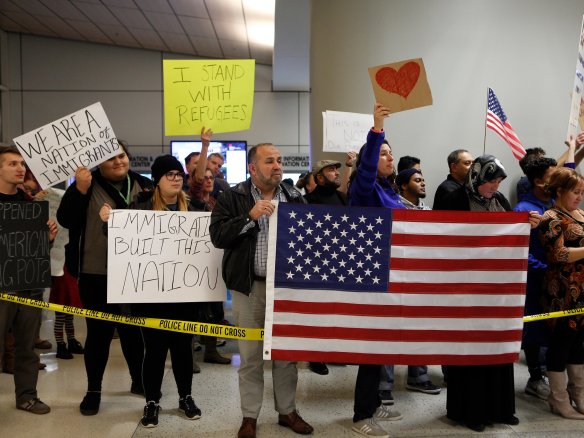 AFTERMATH OF TRUMP’S ENTRY BAN: CHAOS REIGNS AS IMMIGRANTS AND REFUGEES ARE DETAINED AND DEPORTED AT U.S. AIRPORTS

President Trump on Friday (Jan 27) signed an executive order that immediately blocked refugees from any country and citizens of seven Muslim-majority countries from entering the U.S. – including people holding legal visas and permanent residents holding green cards.The seven countries are Iraq, Iran, Syria, Libya, Sudan, Somalia, and Yemen – none of which were involved in the 9/11 and San Bernardino attacks, although those attacks were cited as reasons for the ban.

By Saturday afternoon (Jan 28), the chaos that this poorly considered and abruptly implemented order created was apparent across the U.S. and the world: On arriving at U.S. airports, people from the banned countries – like international students, immigrants returning to their families, and business folk – were detained or promptly deported.

Word got out and large protests in support of immigrants and refugees erupted in airport terminals – in the U.S., as well as abroad where people from the travel-banned countries heading for the U.S. weren’t allowed to board planes. Protests continue.

Meanwhile, lawyers are at work on behalf of the detained, deported, and those likely to be denied U.S. entry or deported despite their previously legal right to be here. As of this morning (Jan 29), several federal courts have temporarily blocked aspects of Trump’s order, allowing some of the detained to enter the country.

Expect much more media attention on this matter – it’s being covered as I write. Stay tuned. This is a very big deal!

TRUMP’S “ALTERNATIVE FACTS” (as his counselor Conway put it)

Until the entry-ban news broke, Trump’s difficulty with accepting facts that negatively affect his grandiose self-image received a lot of media attention – particularly regarding two matters: (1) the fact that no evidence exists, none at all, to support Trump’s claim that Hillary Clinton won the popular vote with 2.9 million more votes than he did only because there were 3 to 5 million illegal votes – all of which went for her; and (2) he refused to accept the fact that the crowd at Obama’s 2009 inauguration was considerably larger than his, despite the ocular evidence in the side-by-side photo above. (See this linked NPR story for more details, including on several matters that suggest Trump has a serious fact-deficiency problem).

Why does Trump’s penchant for making up facts matter? Indeed, shouldn’t we count on our President to tell us the truth? If he’ll create media squabbles about trivial matters like crowd size, what else might he lie about and what important issues could the media be covering instead? Climate change and other environmental issues, for example, should receive a lot more attention than it has in the past.

TRUMP AND THE ENVIRONMENT

Meeting with business men on Tuesday (Jan 24), Trump promised to cut regulations by 75% and told the group that he’s something of an environmentalist and has “received many, many environmental awards.” He first made this claim in 2011; since then reporters have looked for evidence, finding none. The Washington Post did, however, give Trump an award for this claim: Four Pinocchios – in other words, “whoppers.” Apparently he’ll lie about anything.

The new administration’s disregard for the health of our planet was displayed in several other ways this week. For one thing, Trump signed an executive order on Tuesday (Jan 24) giving the Keystone XL and the Dakota Access oil pipelines the go-ahead for construction. But, as The Hill reported, these are not done deals due to lawsuits pending in Nebraska and by the Standing Rock Sioux.

The day before that (Jan 23), ProPublica confirmed that the Trump administration had “imposed a freeze on grants and contracts by the U.S. Environmental Protection Agency [EPA], a move that could affect a significant part of the agency’s budget allocations and even threaten to disrupt core operations ranging from toxic cleanups to water quality testing.” This freeze goes along with Trump’s executive order to institute a hiring freeze for all new federal workers.

BEST NEWSY THING FOR ME THIS WEEK

Hidden Figures received three nominations for an Academy Award, including Best Picture. The film is based on a true story about 3 African American women whose talents and courage led to holding crucial NASA positions during the early years of the space race. My husband and I enjoyed the film on Wednesday. In my view, it’s a must-see!