Today on Mother’s Day I’m remembering a mother and friend I’ll call Adeline. She could brighten my day with a funny greeting card. She loved animals and usually had a little dog, a cat, and a large collection of mechanical stuffed animals. She lived alone in a run-down house with floors sagging under the weight of her kitchen and bathroom fixtures. Her generous heart was as big as her stories were long. She would go on and on about the doings of someone I didn’t know. After all, she had little to give but her stories and time. Adeline worked hard at low-paid jobs most of her life, mainly waitressing. She held a minimum-wage job at a nursing home her last years, before dying of breast cancer.

Today I’m also thinking about the mothers and their children who are going hungry in increased numbers since the pandemic stripped them of their meager paychecks. The Brookings Institute reported that in April about 20% of American children age 12 and younger experienced food insecurity, a rate three times higher than during the Great Recession. Alarming! And yet, as the New York Times reminds us, although Republican legislators agreed to spend trillions of dollars on other distressed economic sectors, they “have balked at a long-term expansion of food stamps,” a proven program for reducing hunger. Meanwhile, we see images of cars lined for miles to access food at food banks.

These families live, as Adeline had, in the economy’s doughnut hole, a widening hole now with unemployment in April over 20 million. Many powerful people who could ease their hunger and health concerns care little about them, care little about the low-paid workers who help to keep this country running – domestic, retail, agriculture, health, and service workers. Forgotten, uncared for, struggling just to get by. After the pandemic, their condition will persist unless we learn how to create and maintain an economy that works for everyone. 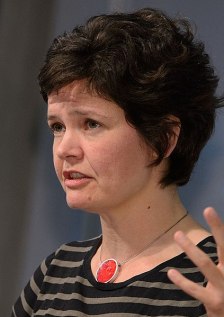 Now is an excellent time to reconsider our economic values. Kate Raworth, a senior researcher at Oxford University’s Environmental Change Institute, has an intriguing plan. She calls it Doughnut Economics. She calls for us to change from growth to sustainability as our economic model, to abandon the economic goal of endless growth through consumerism and take as our goal a healthy, happy population and a healthy planet by mending and fostering the Earth’s life-support systems like climate, water, forests, biodiversity, and soil. (For an quick explanation of Raworth’s doughnut, watch this 1 ½ minute animated video.) 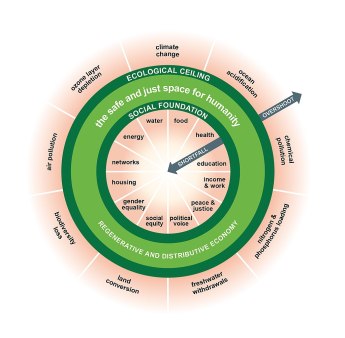 To help us plan for a better future, Raworth asks us to think of the sustainable economy as a green doughnut. The doughnut itself is where our needs are taken care of, where everyone has food security, health care, housing, education, job opportunities, and overall quality of life. I now enjoy these things. Chances are you do too. But too many in our country and worldwide are missing some or all of these essentials for a good life; they are in the doughnut hole and not, like us, part of the doughnut itself. Beyond the doughnut are the needs of the planet and all life on it – climate, air, water, vegetation, wildlife, resources, and so on. The goal is to bring everyone into the green doughnut and to mitigate the damage to the life-supporting realm beyond the doughnut.

Our current measure of economic health (GDP), Raworth says, is like the trajectory of an airplane that flies higher and higher without ever landing. How is such an economy viable in the long run? What happens when our airplane hits an unanticipated storm? Well, our airplane is currently in a storm unlike one we’ve ever experienced. We’ll get through it, somehow. But we need to land the plane and ground it in favor of an economy that works for all of us, from the poorest to the richest citizen.

For social and economic policies to be just, wrote American philosopher John Rawls in Justice is Fairness, they must “be to the greatest benefit of the least-advantaged members of society” or, at the very least, to do them no harm. Likewise, Jesus said during the Sermon on the Mount, “whatever you did for one of the least of these brothers and sisters of mine, you did for me” (Matthew 25:40).

Note: I learned about Raworth’s economic model during TED Radio Hour’s episode called “What We Value” (5/1/20, beginning at minute 14:45). She goes into greater detail in her TED2018 talk. I recommend both to you.

2 thoughts on “The Doughnut and an Economy for Everyone”