NOTE: If you receive my posts by email, remember to go directly to my website by clicking “Political News In Brief” at the top of the message – for easier reading and for an aesthetically more pleasing experience.

People surrounding the new president are making almost as much news as Trump himself. This week I put a spotlight on a newsmaker whom Saturday Night Live (SNL) just wickedly lampooned. After that, I encapsulate several other news stories. Preview: In the future, I will spotlight other lampooned newsmakers. 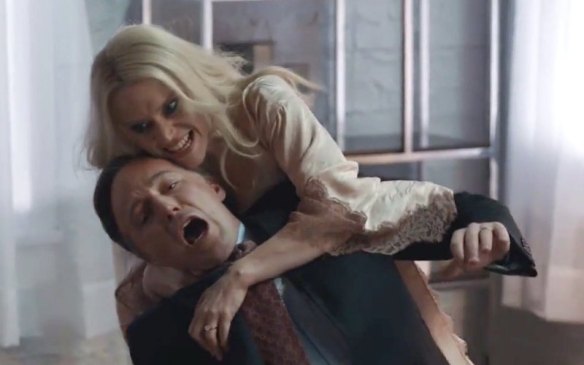 Conway served as Trump’s campaign manager and now serves as Counselor to the President. In a bizarre SNL sketch last night (Feb 11), one that brings to mind the movie Fatal Attraction, Kate Mckinnon portrayed Conway as the sexy, murderous, spurned lover of Jake Tapper (Beck Bennett). Tapper is the CNN talk-show host who refused to have her on his Feb 5 Sunday show, State of the Nation, because of her loose connection to the truth.

Last Tuesday (Feb 7), however, Tapper conducted an extensive interview with Conway on his weekday show, The Lead, that, according to mediamatters.org, “only confirmed her credibility issues.” She ducked questions and continued to promote Trump administration misinformation. For example, when Tapper confronted her on Trump’s repeated claim that the murder rate is “at its highest level in 47 years,” which is provably false (in fact, the rate is among the lowest ever), Conway responded by complaining about her treatment in the media. 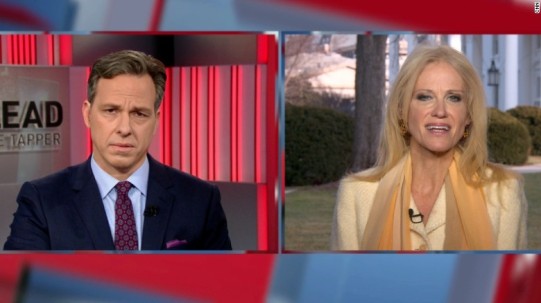 Then Thursday (Feb 9), Conway seriously misstepped in a way that even Republican legislatures couldn’t ignore. She was on Fox & Friends defending Trump’s tweet that blasted the Nordstrom department store chain for dropping his daughter Ivanka’s fashion line. Conway told viewers, “Go buy Ivanka’s stuff…. Go buy it today, everybody. You can find it online.” Oops! That appears to be illegal!

“Federal ethics rules state that an employee of the government’s executive branch cannot use public office for personal gain or to endorse products or services on behalf of friends or relatives,” explained the New York Times. Jason Chaffetz, the Republican chair of the House Oversight Committee, and Elijah Cummings, the committee’s ranking Democrat, have jointly sent a letter to the Office of Governmental Ethics requesting an inquiry into the matter. Meanwhile, the White House says Conway has been “counseled,” whatever that means.

Week’s Most Immediately Far-Reaching Story:  Federal appeals court rules 3 to 0 against Trump on travel ban – The judges wrote, “The Government has pointed to no evidence that any alien from any of the countries named in the Order has perpetrated a terrorist attack in the United States. Rather than present evidence to explain the need for the Executive Order, the Government has taken the position that we must not review its decision at all.” The Trump administration promises to fight the ruling; however, for now there is no travel ban on people legally entering the U.S. from anywhere. (WP)

In Close Votes, the Senate Confirms Three Highly Controversial Trump Cabinet Picks: First there was the confirmation of Betsy DeVos as Education Secretary, a billionaire who donates thousands to Republicans and who has no experience in (nor, it seems, previous love for) public education (NYT). Then Jeff Sessions was confirmed as Attorney General, a former senator considered by many as no friend of civil rights or voting rights (NYT). Finally, there was Tom Price as secretary of Health and Human Services, a former legislature who opposes the Affordable Care Act and wants to overhaul Medicare, possibly making it a voucher program (The Hill).

Deportation of Immigrants Stepped Up: She Showed Up Yearly to Meet Immigration Agents. Now They’ve Deported Her – Guadalupe García de Rayos, 35, yearly checked in at the Immigration and Customs Enforcement office (ICE), a requirement for being caught using a fake Social Security number so she could get a job at a water park to support her family. When she checked in on Wednesday (Feb 8), she was arrested and deported to Mexico. Ms. Rayos has lived in the U.S. since she was 14 and has a family – a husband and two children now in their teens. Her deportation, which led to protests, is the public face of the ICE “surge” that took place this week. (NYT)