It’s fun Friday. Time for another bad poem. This one is for my friends here at home who may wonder why I play World of Warcraft (WoW). But, of course, I hope everyone who lands on this page enjoys it. I illustrate my verse with screenshots that I took at various times while playing. It can be sung, sort of, to the chorus of Bing Crosby’s 1944 hit “Swinging on a Star.”

Would you like to fly in the clouds
On a dragon so blue and proud,
Glide grandly all up and down,

Or would you rather fly a pig?

Would you like to camp by the sea,
Spend some time with my fox and me,
Fry some fish on an open fire, 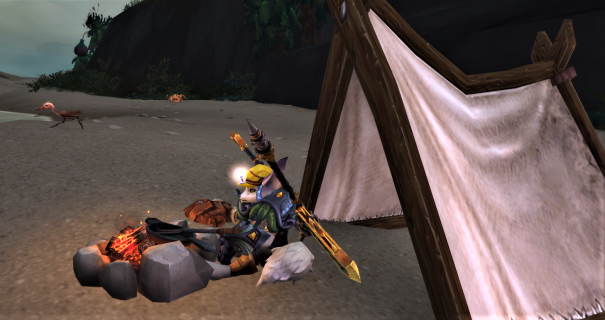 Or would you rather dine with friends?

Would you like to go to a faire,
Watch fireworks burst in the air,
Roll the coaster for a fun scare,

Or would you rather dance with bears? Would you like to join in a fight,
To kill monsters that are affright;

Triumph of good over evil feels right
For reflection at the beginning of night.

Now this game of WoW is by no means highbrow,
But it works for me quite enjoyably.